Thanks for a great expedition!

Today the team arrived in Punta Arenas in the wee hours of the morning and soon after team members started departing Punta Arenas on homeward flights.

The Amundsen Centennial South Pole Expedition was an incredible journey and all of us at PolarExplorers are happy to have been a part of this expedition. It was a pleasure to work with each team member in advance of the expedition, and sharing the adventure via sat phone calls and audio updates has been a lot of fun. Rick and Dirk had a wonderful time with the team and they look forward to sharing more adventures in the future. Just because the team is no longer on Antarctica doesn't mean that the journey is over. Rather the expedition will live on as long as there are stories to tell and memories to share.

We hope you have enjoyed the daily updates from Antarctica! If you've enjoyed this armchair adventure we recommend that you follow our Full South Pole Expedition Blog, a team of 5 adventurers skiing from the coast of Antarctica near Union Glacier all the way to the South Pole. They are less than half way through their expedition, so there are many more updates ahead!

Of course when Amundsen reached the South Pole his expedition was only half over, he had to make it all the way back to Framheim. 100 years ago today Amundsen wrote in his jornal...


But we can say with some certainty that we are south of 89°59’. We have circled in the possible missing seconds. I think our observations will be of great interest to experts. We began observations here at 12 am (Framheim time) and completed them at 12 pm (Fr. time). We shall leave here at 7 pm and from now on will go at night so as to have the sun behind us. We have set up the little tent with the Norwegian flag and “Fram’s” flag below it, waving from the top of the tent pole. Several things were deposited in the tent: my sextant with glass horizon, a hypsometer, three reindeer foot bags, some reindeer fur boots, and a pair of mittens. I left a letter to the King, and a few words to Scott, who I presume will be the first to come here after us. On the tent pole we fastened a plate on which we all wrote our names. And so farewell, dear Pole, we won’t meet again."

Again, thanks for following our Amundsen South Pole Expedition!

-The PolarExplorers team
Posted by . at 7:27 PM No comments:

The team is on their way home! After a beautiful day in Union Glacier the team boarded the charter flight bound for Punta Arenas late tonight. They expect to arrive in Punta Arenas around 03:00 tomorrow morning. As you'll hear in Jim's audio update they were having a great time at Union Glacier, staying up until the wee hours of the morning chatting with friends and watching movies (aren't they supposed to be "roughing it"?)

We will close the blog with a final report tomorrow night. In the meantime make sure to listen to Jim's audio report and check back again tomorrow for a final update from the team!

Today the team planned to return to Punta Arenas but poor weather prevented the flight. "Poor weather" does not necessarily mean a storm or even nasty conditions. Sometimes it just means flat light or low visibility that prevents the plane from landing on the ice runway.

The plane that is picking up the team is coming from Punta Arenas, with a one-way flight time of approximately 4.5 hours. Because the "green light" to fly is so weather dependent we often don't know if the plane will fly until just hours before. In the meantime the team is doing just fine... last report was that the wine was still flowing and everyone was having a good time :)


The next weather report and flight update will come tomorrow morning. We will keep you posted, so check back again soon.
Posted by . at 6:09 PM No comments:

Back at Union Glacier...

Today the team woke up at the South Pole, had breakfast and soon after got the all clear to fly back to Union Glacier. Everyone packed his or her items, got on the plane and waited as the plane revved its engines, only to have to disembark because the plane's skis were frozen in place (it was, after all a frigid -35 C). Soon enough they had taken off from the Amundsen Scott South Pole Station and three hours later they were back at Union Glacier.

The relative warmth of Union Glacier (only -15C!) allowed the team to relax and gather outside around the makeshift Amundsen Bar, perhaps the only ice bar in the southern hemisphere! The team was treated to appetizers and champagne followed by a formal luncheon in the mess tent.

If the weather holds they anticipate returning to Punta Arenas, Chile, tomorrow. They have had a wonderful time in Antarctica and they look forward to sharing the stories with family members and friends.

Daniel Pena leaves a wonderful recap of the day, so make sure to check it out, and visit the blog again soon for another update from the team!

Amundsen Anniversary and another night at the Pole...

100 years ago today Norwegian explorer Roald Amundsen reached the South Pole after traveling 870 miles from his coastal base, Framheim. He arrived at the Pole more than a month before British explorer Robert Falcon Scott. The two expeditions were very different from each other, both in their planning and execution. In the end both were remarkable feats of exploration.


With most of the celebrations winding up at the South Pole the team was planning to fly back to Union Glacier this afternoon. Deteriorating weather and low visibility prevented the flight and the team remains at the South Pole. Weather delays are not uncommon. They are hoping that the weather clears overnight allowing for a morning flight back "north". Meanwhile they pass the time in one of the most fascinating places on Earth (if it just weren't so darn cold!)

Make sure to listen to Dave Nelsen's audio update and check back again tomorrow for another update from the team!

Today the team had a great day. The ski team woke up and had a hearty breakfast, broke camp and skied the remaining 5 miles to the South Pole. They were joined at the Pole by our flight team and together they celebrated a very special occasion - the wedding of Sally and Daniel! As if the 100 year anniversary of the South Pole's discovery was not enough!

There are many festivities taking place and several expeditions converging at the Pole. At 12:00AM Punta Arenas time the Norwegian Premier is scheduled to ski to the Pole from a short distance away and deliver a short address. This is to be broadcast in Norway tomorrow, the actual anniversary (or today if you on the other side of the date line!) Our team will be with his at the Pole as this occurs.

The South Pole has been temporarily transformed for this event. The Pole itself is surrounded by the country flags of the original signers of the Antarctic treaty. Nearby there is a Visitor's Center tent to introduce expedition teams to the research that is being conducted at the South Pole as well as what it's like to live at the base. About a kilometer away is the NGO basecamp, where our team is staying. This has turned out to be a "who's who" of polar explorers and adventurous travelers.

Our team is part of a larger group of adventurers, dignitaries and scientists from around the world who have gathered to commemorate Amundsen's remarkable 1911 expedition. 100 years ago today he wrote in his journal...

"Our finest day yet up here. It has been still most of the day with burning hot sunshine. Surface and terrain the same. The snow crust is fortunately so hard that the sledges and dogs only sink a little in it. The hypsometer still shows a decline, although very little and it must now be presumed that we have not only determined the highest point but also come down on the other side. We have done 15 n.m. today and now lie, after the midday observations, at 89°30’30”. Observations and instrument agree wonderfully every day now. We are relying on only one sextant now, the Fram sextant, since the other one has unfortunately had a knock and is not dependable. Helmer, Wisting & I now use the Fram sextant together.

Amundsen used a sextant to navigate but today the South Pole station stands on the horizon, something our skiers can attest to. We will be posting  more about Amundsen's arrival at the South Pole in tomorrows blog entry. In the meantime make sure to listen to the audio report from Jim Johnson and check back again tomorrow for another update from the team!

The skiers reported beautiful weather, with temperatures near -30C and barely a breath of wind. Without wind or clouds the team felt the warmth of the sun, which helped to mitigate the -30 temperature. They skied roughly 12 kilometers, much of it with Bjarni out front setting the pace and navigating.

After putting in a good day of skiing the team set up camp and feasted on a high calorie dinner that should keep their inner furnace burning through the night. Tomorrow they will ski the remaining distance to the Pole and reunite with the other team members.

100 years ago today Amundsen wrote in his diary:

Magnificent weather. Almost still and partly clear. About –25°C. Same fine terrain and surface. According to the hypsometer it looks as though we are going very slightly downwards. Maybe it is just the weather conditions that make it seem so. Midday observations, which were taken under the most favourable weather conditions, still, clear, distinct sun and horizon, 89°6’. Observations and instruments again completely coincide. We have done our usual 17 n.m. and now lie at 89°15’ – three days march from our goal.

Make sure to listen to Bjarni's audio update and check back in tomorrow for another update from the team, as they begin the official South Pole anniversary celebrations! 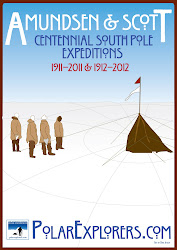 Send in Your Questions

Email your expedition questions here. We'll send your question to the team and post their response on the blog!

.
PolarExplorers is a premier polar guiding company helping individuals and groups from around the world achieve their dreams of standing at the North Pole, South Pole, crossing Greenland, or exploring other exotic destinations in the Arctic and Antarctic. Visit us at online at www.polarexplorers.com